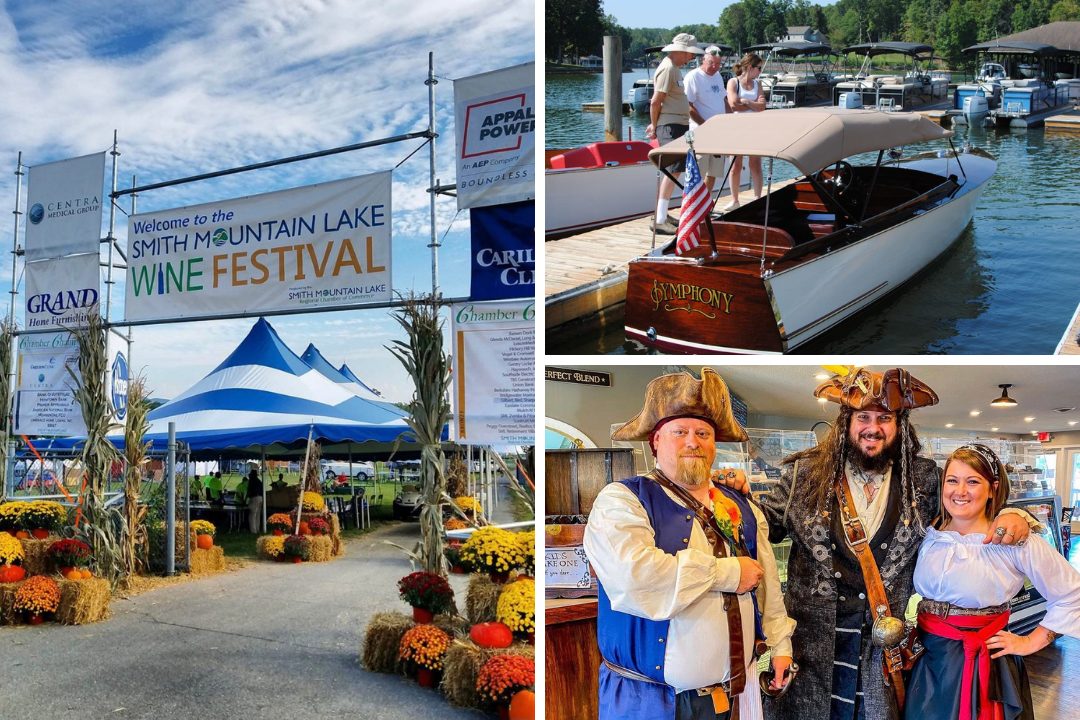 June 1, 2021 - The summer season has arrived at Smith Mountain Lake and, like us, you're probably itching to get out and enjoy some fun-filled events.

We have plenty of annual events for you to experience but keep in mind, too, that many of our local restaurants have live music all summer long, as well as events like Sunset Saturdays at Hickory Hill Vineyards & Winery and First Fridays on Franklin! You can also stay up to date on all events in the area through our community calendar.

Plan your visit around one (or more!) of these awesome upcoming events at SML. 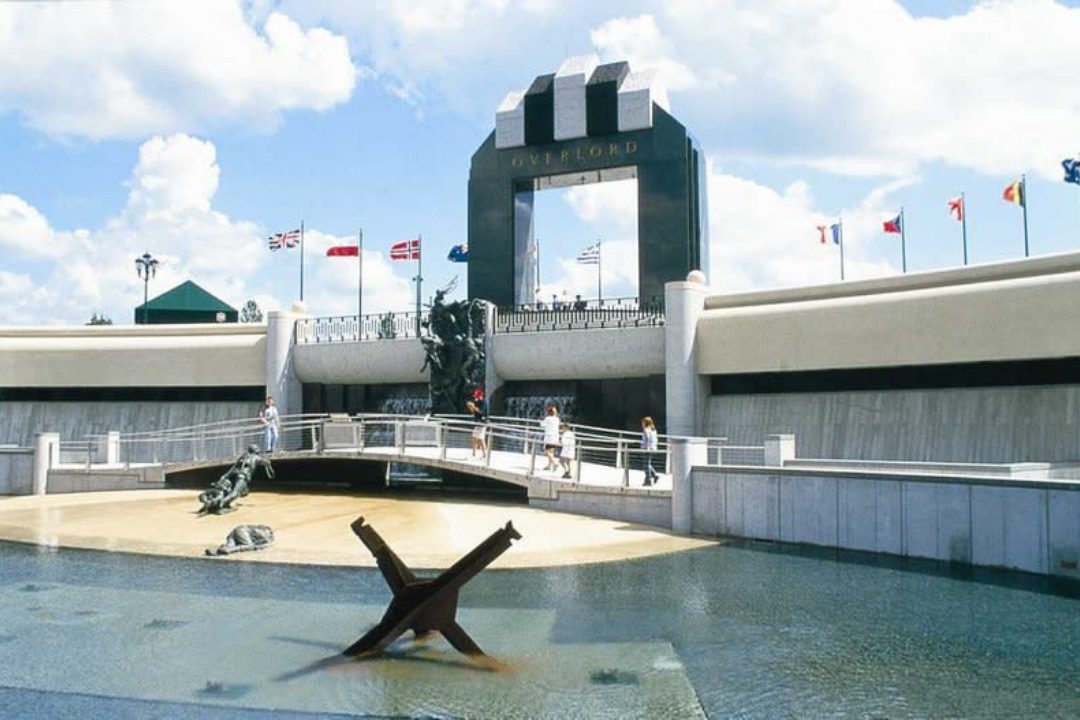 4th-6th - 77th Anniversary at National D-Day Memorial, a three-day commemoration featuring a virtual panel discussion by renowned historians John McManus, Joe Balkoski and Mitchell Yockelson. On-site events include a book signing by award-winning author Rick Beyer, music by the 29th Division Band, historical displays, and numerous other opportunities for visitors to hear the stories of D-Day, its impact on history, and why it is important today.
5th - SML Bassmasters Open Tournament
12th - Franklin County Court Days, Making Music & Memories. From 10 a.m. to 2 p.m., in addition to market vendors, the Farmers Market will be filled with activity. To the delight of kids of all ages, there will be multiple kids activities! For the adults, a cooking demonstration by Center Stage Catering, a bake-off contest, and a pie-eating contest. And for the enjoyment of all, live music at the Farmers Market and several music venues up Franklin Street to the bridge at N. Main Street. This event pays tribute to a long-standing tradition with Franklin County. Years ago, there was no sitting Circuit Court Judge. So, once a month, a traveling judge would come to town to take care of legal issues. Over time, "Court Days" became a social event as residents would travel to Rocky Mount to meet friends, make music, trade goods and "take care of business."
23rd-27th - Lyrics on the Lake Songwriter's Festival, the East Coast's largest Songwriter's Festival featuring over 35 writers at 12 venues. Annually, this event showcases some of Nashville's biggest hit songwriters in the heart of the Blue Ridge Mountains on the banks of Smith Mountain Lake. In 2012, Lyrics on The Lake began as a lakeside fundraising pool party, bringing together a group of local Smith Mountain Lakers with hearts for songwriters, and two songwriters with hearts for people. In 2013, the first Lyrics On the Lake Songwriters Festival was born. Over the past five years, Lyrics on The Lake has hosted more than 200 songwriters as well as raised more than $100,000 for charity. Free and open to the public, it brings an estimated 5,000 people to the lake each year.
28th - Wake the World, a non-profit organization of boat owners providing water sports opportunities to abandoned, abused and neglected children, as well as for the handicapped and wounded warriors. 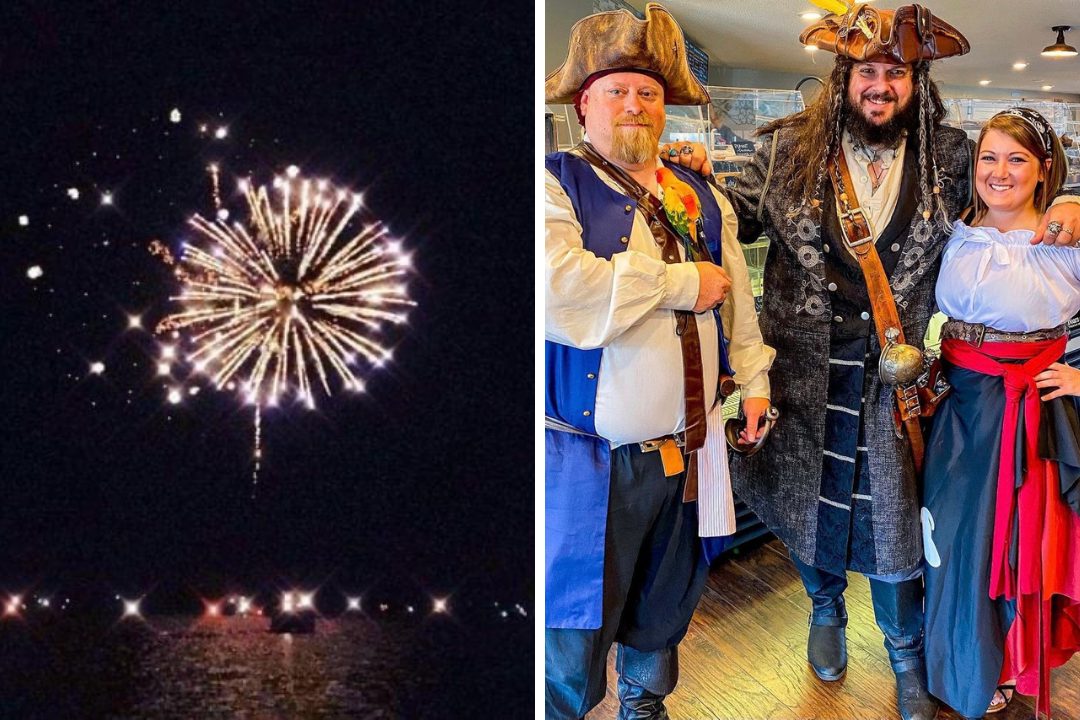 2nd - Independence Fireworks at Mitchell's Point Marina, Watch from your boat on Smith Mountain Lake, or from your chair at the marina. Donations are accepted to the Semper Fi and America's Fund here or in person at the Marina office.
3rd - Fireworks Display at Parkway Marina sponsored by Saunders Volunteer Fire Company
10th - Horse & Hound Wine Festival at Peaks of Otter Winery
16th-18th - Smith Mountain Lake Pirate Days, a fun-filled weekend for the whole family, Smith Mountain Lake Pirate Days continues to grow in popularity each and every year! Pirate-themed events include a Pirate Ball with live music and a costume contest, Pirate Trivia Night, water battles, a Pirate Festival, and much more. Businesses and restaurants around the lake offer up specials and sales throughout the weekend, so make plans to join us the third weekend in July.
24th - Gross' Orchard Peach Festival 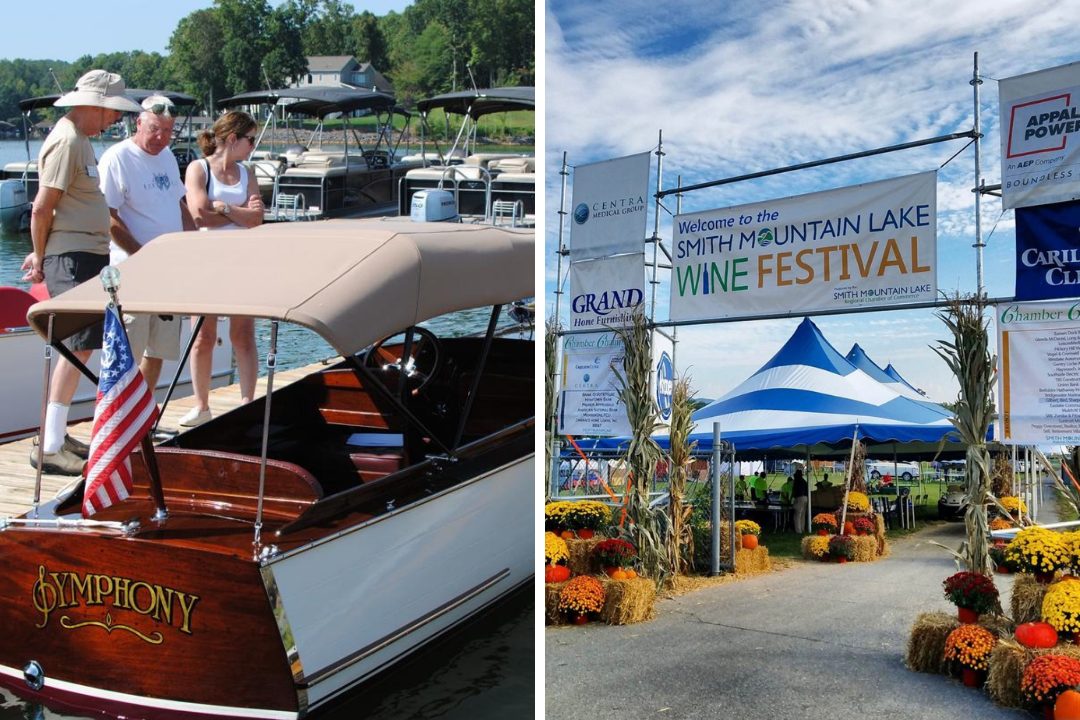 18th - 30th Annual Smith Mountain Lake Antique & Classic Boat Show, a fun-filled opportunity to cruise the lake, display your boat, and chat with other antique boat enthusiasts. The show's venue, at The Pointe at Mariners Landing, offers one of the most scenic vistas on Smith Mountain Lake.
18th - 43rd Annual Boones Mill Apple Festival,  All proceeds will go to an annual local scholarship for a Franklin County student to pursue his or her education at a four-year college.
18th - 40th Anniversary Bedford CenterFest, one of Virginia's largest outdoor street festivals. This rain or shine festival is sponsored by the Central Virginia Business Coalition and is a family-friendly event that celebrates and promotes the region's rich cultural traditions of food, art, crafts and music. 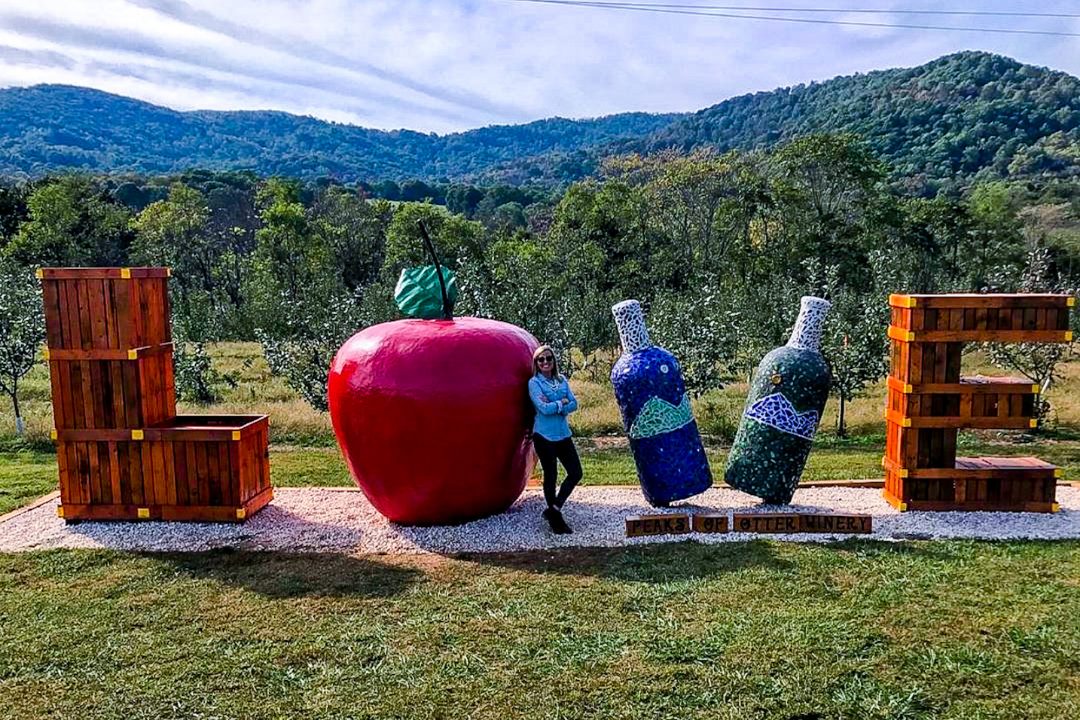 8th-10th - 30th Anniversary Smith Mountain Lake Charity Home Tour. Eight beautiful lakefront homes are opened to the public for touring on Columbus Day weekend. All Tour homes are accessible by road and by water, with a significant number of residents and visitors traveling from home to home by private or rented boat. The event benefits eight local charities.

23rd - Blue Ridge Folklife Festival. For 47 years, on the fourth Saturday of October, this festival has brought together a host of musicians, moonshiners, craftspeople, cooks, motorheads, mule jumpers, horse pullers, coon dog racers, antique tractor buffs, and old-time gamers for a celebration of the rich heritage and traditions of the region. Festival participants are the real thing, sharing folk traditions that have been a part of their families and/or communities for years. The Blue Ridge Folklife Festival is handicap accessible. It is a rain or shine event. Parking is free, and ticket sales go toward offsetting the costs of staging the festival and other Blue Ridge Institute programs. 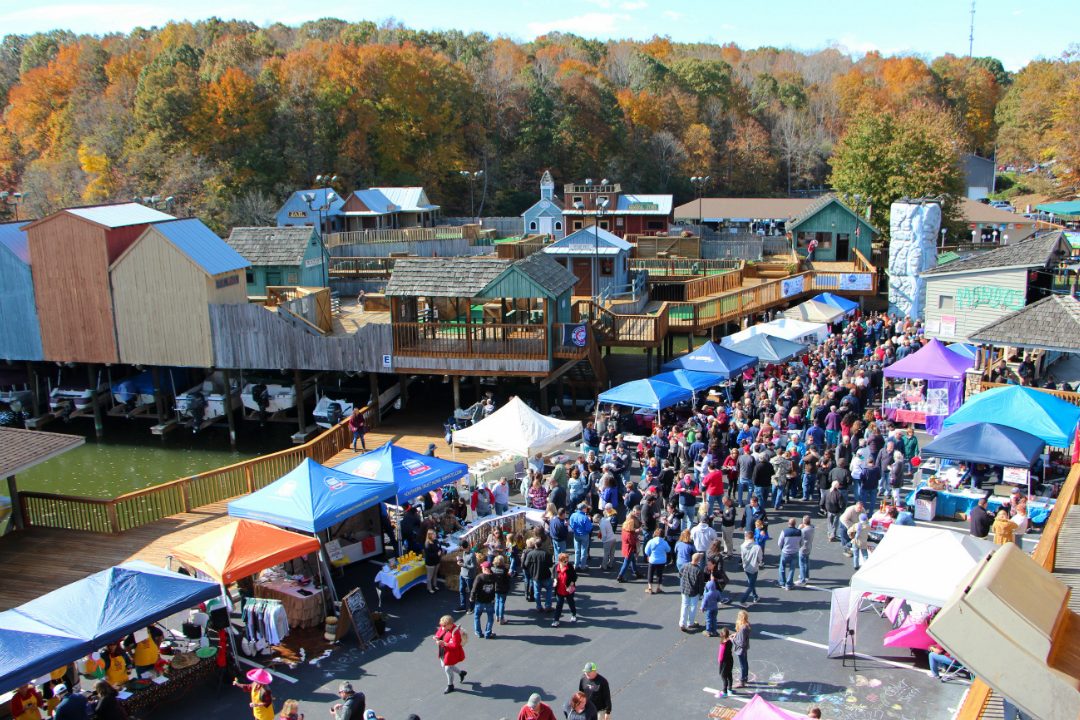 6th - Smith Mountain Lake Chili Festival, Stunning fall foliage and cooler temperatures create the perfect atmosphere for this annual, family-friendly lakeside event. A competitive chili cookoff is at the center of the action with teams going all out with themes, decorations and costumes! Enjoy chili tastings and then cast your vote for “People’s Choice” and “Showmanship.” Also awarded is an overall “Best Chili” trophy. Stroll the decks of Bridgewater Plaza while enjoying live music, shopping and perusing the wares of a variety of craft vendors. Come by car or boat!

We hope you've found this WanderLove blog post helpful in planning your vacation to Smith Mountain Lake or getting familiar with all of the region's community events from now through November! Be sure to check back next month to read about the top hiking spots in and around SML (to include dog-friendly hikes.)